you_are_are Home » Food Chemistry » How to Perfect the Art of Braising

How to Perfect the Art of Braising

If winter had a scent, it would be the smell of a piping hot stew. What could be more comforting than fragrant, hearty sauce enveloping tender morsels of meat? To keep us cozy during the cold months ahead, our expert shares her secrets for a successful braised dish.

Braising is a technique used to cook tougher cuts of meat, such as the shoulder, shank and brisket. The method is simple: After it’s been nicely browned in fat, the meat is cooked in a covered pot with some liquid (be it stock, wine or water) until it is tender enough to fall apart under the light pressure of a fork. The name of the technique comes from the French word braiser, referring to the original method that involved cooking meat in a covered vessel set on a bed of hot, glowing coals (braises). Hot coals were also piled on top of the lid so the meat would cook evenly. Braising now generally means cooking any dish—meat or vegetables (think of braised cabbage)—by slowly simmering it in a small amount of liquid over low heat, in a covered pot. Pot roasts and stews are good examples.

How does braising tenderize meat?

Braising breaks down collagen, an elastic connective tissue found in all muscles to varying degrees. Acting like a thin translucent sheath, collagen surrounds muscle fibres, providing structure and support. The more hard-working a muscle is, the more collagen it requires to do its job. Raw, tough cuts of meat are near-impossible to chew because collagen binds muscle fibres together in tight bundles. Cooking breaks down this elastic collagen, dissolving it into soft, melt-in-your-mouth gelatin. Without their elastic sheaths, the fibre bundles literally fall apart, resulting in fork-tender meat. As for the newly formed gelatin, it melts away into the sauce, adding a velvety mouth-coating richness to the braising liquid. This newly formed gelatin also explains why braising liquids form a gel upon cooling.

Converting collagen into gelatin takes time. How much time? It’s a matter of heat: The higher the temperature, the faster collagen breaks down. Depending on the cooking method you choose, you’ll have a pot of stew ready to serve in as little as 15 minutes, or in as much as eight hours. Be aware that speed comes at a cost: Higher cooking temperatures squeeze out more juice from the meat, as the protein in the muscle fibres coagulates, resulting in dryness. When it comes to braising, low and slow is the way to go.

› 30 minutes
in the pressure cooker

Because of its high temperature, pressure cooking is not technically considered to be a braising method, but it sure is a quick-and-easy way to tenderize meat. The temperature in a pressure cooker is around 250°F (120°C), which is a good deal hotter than the normal boiling point. As a result, collagen very quickly breaks down into its gelatinous form. The exact cooking time depends on the cut and size of the meat. Stewing cubes soften in just 15 minutes (perfect for a quick weeknight meal!) whereas a large pot roast takes as little as 45 minutes. Pressure cooking is certainly a time saver, but the meat tends to be dry and stringy as it gives up a lot of its juice at this high temperature.

› THREE hours
in the oven or on the stove

Meat can be simmered in a covered French or Dutch oven, either in the oven or the stovetop. Ideally, the temperature should be kept just below boiling, between 185°F (85°C) and 195°F (90°C). In this temperature range, the collagen will need two to three hours to soften, depending on the size of your cut. For best results, do not allow the braising liquid to boil; adjust your burner to the lowest setting (the liquid should be at a bare simmer), or braise in a slow oven set between 275°F (135°C) and 300°F (150°C). Some chefs swear by an even lower oven temperature of 200°F (95°C). The result is moist, tender meat, but it requires patience, as you’ll be doubling the cooking time. Choose a cooking pot with a tight-fitting lid, to keep as much liquid as possible from evaporating. Enamelled cast iron French or Dutch ovens are the ideal vessels for braised dishes, as they retain heat well and cook evenly. (See p. 48 for our one-on-one with a Le Creuset expert.)

›SIX TO EIGHT hours
in the slow cooker

Slow cookers are the most practical, hands-off way to braise meat, plus they deliver tender, succulent pieces every time. How? From low and slow cooking. The temperature in a slow cooker rarely surpasses 170°F (75°C) to 175°F (80°C). Thanks to this gentle heat, the meat retains more of its natural juices than with the previous two methods, and is therefore less dry. At these low cooking temperatures, collagen takes six to eight hours to soften so be sure to use the longest cycle on your slow cooker. 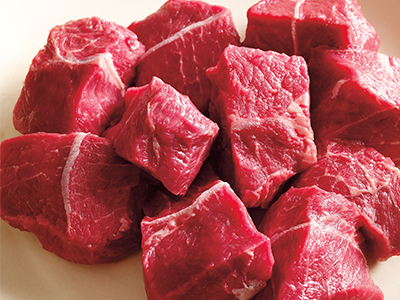 Quickly searing your meat first will produce a darker, richer and more savoury sauce. Browning happens as a result of a chemical reaction between the meat’s naturally occurring sugars and proteins when exposed to high heat. This is what is known as the Maillard reaction and it gives meat a wonderful roasted flavour. Make sure to sear cubes in batches so as to not overcrowd the bottom of the pot and cause the meat to boil rather than brown.

Using too much liquid will dilute the flavour of your stew, leaving you with a sauce lacking in both body and taste. Keep in mind the meat will release about a third of its weight in the form of fat and juice into the braising liquid as it cooks. Add only enough liquid to come halfway up the meat, no more.

3/ Check it often and avoid overcooking

Whatever your cooking method of choice, you will know the meat is ready when a fork slips easily in and out, and it pulls apart without any resistance. This is a sign that the collagen has properly turned into gelatin and the muscle fibres are no longer bound together. Check the meat periodically throughout the cooking process. Is it still tough? Simply continue to cook. Is it tender? Remove it from the heat to keep it from overcooking and drying out.

Braised meat loses a lot of its juice during cooking and has a tendency to dry out and become stringy if exposed to air. To avoid this problem, store the meat in its cooking liquid. Note that braised dishes often taste better the next day, as the meat will actually reabsorb some of the liquid as it cools.