How to Make the Best Niçoise Salad

The Niçoise salad has been reinterpreted many times over the years. The one we have developed here departs from the traditional recipe (which doesn’t contain any cooked veggies). On the other hand, it gives way to local, seasonal veggies. Here are a few tips to make this reinvented classic a success! 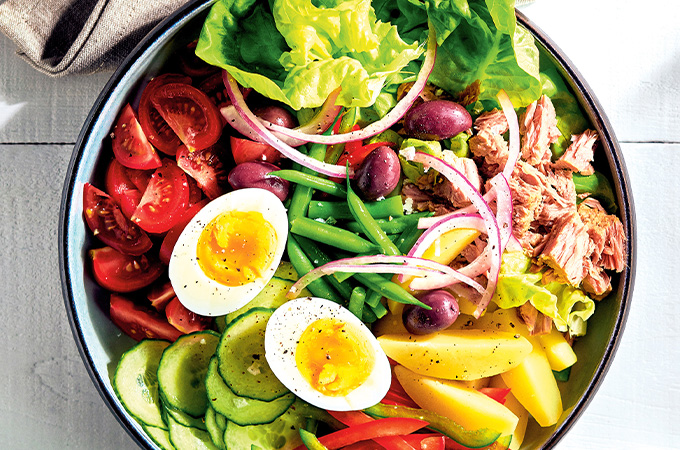 A Niçoise salad is traditionally made with marinated anchovies, which are more tender and delicate than the salty version in this recipe. The goal is not to reproduce the classic, but rather to meet everyone’s expectations. We first replace the anchovies with tuna, broken up into chunks and incorporated into the salad, which is commonplace in most variations. Anchovies are then chopped and integrated into the vinaigrette, bringing that salty taste.

The delicacy of the vegetables makes all the difference, and not only because it adds a hint of sophistication to the salad. Thinly sliced, the onion, peppers and cucumber are softened thanks to the dressing. So, upon first bite, even though these veggies are raw, they don’t taste as if they are.

Steaming eggs has the advantage of being fast and reliable. Eggs cooked using  this method are easier to peel, as the shells don’t stick to the white. For these, we don’t want an overcooked yolk, which would just bring a powdery texture. We prefer an egg that holds together well, with a soft centre that isn’t too runny. The perfect yolk is not completely opaque and remains creamy.

Never toss a Niçoise salad in a bowl. It is customary to arrange the vegetables prettily in a bowl or deep plate and wait until the last moment to add the dressing. This is done not only for looks, but for freshness as well. Mixing everything together too soon causes the ingredients (particularly the tomatoes) to release some of their water.

It’s a good tip for when you want to avoid those soggy final bites in the pool of vinegar at the bottom of your plate.